The sparkling Palmiet River water belies the shockingly poor state it is in: unfit for human or agricultural use. The larger catchment has been described as being in a very unhealthy state and is steadily deteriorating. Even the ionic Palmiet plant (Prionium serratum) after which the river is named no longer survives in the catchment. 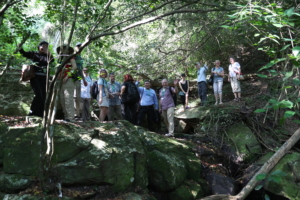 On 23 January 2019. The Palmiet River Watch hosts fifty-four IPCC scientists on an excursion to the Palmiet Nature Reserve.

This was one of several excursions for the scientists to see activities or projects around Durban with relevance for climate change and sustainability in the African context.

The scientists were in Durban attending the first meeting with about 240 authors from around the world, putting together the massive sixth Global Assessment Report for the Intergovernmental Panel on Climate Change (IPCC).

Palmiet River Watch founder and champion, Lee D’Eathe, shared some fascinating geological, archeological and historical facts from the area; and how natural areas were continually being lost.

The Palmiet River Watch is a voluntary group of local individuals who regularly assess river health, run a flood warning system for the Quarry Road community downstream, and monitor and report pollution events, enabling the authorities to respond and minimise the impact. More than 100 pollution events are reported and registered every year.

The appointment of a service provider, with the skills and experience to address the root causes rapidly, is awaited. They would need to ensure there are continual, meaningful, significant, sustainable and measurable reductions of environmental impacts within the Palmiet River Valley,” said Lee. 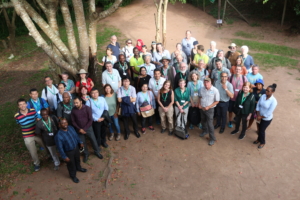 On 23 January 2019. The Palmiet River Watch hosts fifty-four IPCC scientists on an excursion to the Palmiet Nature Reserve

Smiso Bhengu, from Environmental Planning and Climate Protection Department (EPCPD), spoke about the connection between the municipality and climate change. The Palmiet River being included as a proof of a concept project in the uMngeni Ecological Infrastructure Partnership (UEIP).

Kloof Conservancy’s chairman, Paolo Candotti, accompanied by a group of eco-champs from the Aller River Rehabilitation project, spoke about successes and failures in addressing river water pollution, illegal dumping and invasive alien vegetation; and the challenges of providing adequate rubbish bags for residents to dispose of household waste and nappies responsibly.